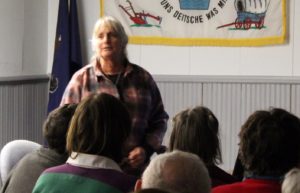 Sue Tantsits of Edge of the Woods Native Plant Nursery was the speaker for our first quarterly meeting of 2019. The meeting was very well attended and everyone enjoyed her presentation on the history of our landscape. She also spoke about how the plants native to our area have been influenced by the activities and development of our communities. 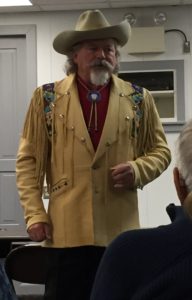 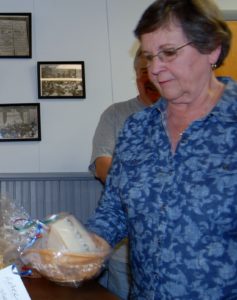 Fifty-one members and community friends of the Historical Society attended the meeting to hear Guy Bieber do a presentation on Buffalo Bill.  Everyone agreed that he surely looks like pictures we have seen of Buffalo Bill.  Everyone who attended received a ticket to win a door prize, which was a book written about “The Life of Buffalo Bill”.  The lucky winner was Pat Shaw.  Debbi Zvanut also discussed our upcoming 13th Annual Basket Social being held on April 24th.  Two baskets were brought to the meeting to entice members with one being offered for a raffle.  $52.00 was raised with this raffle and the lucky winner was Rob Williams, a new member of the Historical Society.

We will be focusing on a family’s contribution to early transportation and commerce in our area in an era of years gone by.  Rauch, Handwerk & Company Builders of Jordan, PA contributed much to early travel and transporting abilities and their reputation is still known by many today.  The manufacturing location in Pleasant Corner is still known for the sturdy body wagons and spring wagons built there.

Joseph Rauch was the founder of The Pioneer Carriage Works.  His son, Victor Rauch, later partnered with his brother-in-law, Amandus Handwerk, to form the firm of Rauch, Handwerk & Co..  They continued and expanded the operations of building carriages, wagons and early travel homes.

Sarajane Rauch Williams and Stephen P. Rauch (grandchildren of Victor Rauch) will be with us at our May 24, 2016 7:30 pm quarterly meeting to share a PowerPoint presentation and the beautiful and informative history book they have compiled on the transportation operation.  The meeting at the Weisenberg Township Municipal Building in Seipstown is one you will not want to miss.